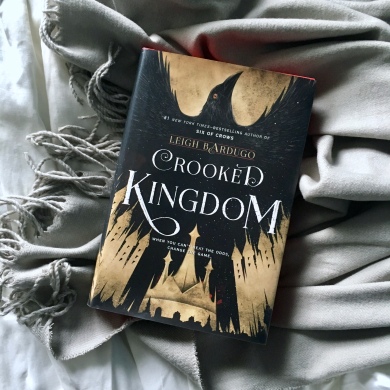 This is the final book in the series and this review may contain spoilers.

Welcome to the world of the Grisha.

Kaz Brekker and his crew of deadly outcasts have just pulled off a heist so daring even they didn’t think they’d survive. But instead of divvying up a fat reward, they’re right back to fighting for their lives.

Double-crossed and badly weakened, the crew is low on resources, allies, and hope. As powerful forces from around the world descend on Ketterdam to root out the secrets of the dangerous drug known as jurda parem, old rivals and new enemies emerge to challenge Kaz’s cunning and test the team’s fragile loyalties.

A war will be waged on the city’s dark and twisting streets – a battle for revenge and redemption that will decide the fate of the Grisha world.

Review: OH MY GOD. What an epic ending to this amazing duology! I read Six of Crows on audiobook back in 2017 and I can’t believe I put this off for so long. Honestly, how does Leigh Bardugo come up with these insane plots?! There are so many layers and depth to her books and it’s just incredible how easily you can be deceived. The amount of misdirection had my head spinning because trying to predict what is going to happen is impossible. I also really enjoyed that she used the different POV’s to go back and kind of explain what went on behind the scenes after something insane happens.

This book picked up where Six of Crows left off and of course Kaz is up to his knees in his usual schemes. He’s such a brilliant character and the perfect antihero! I still can’t handle the chemistry he has with Inej because it’s a constant “will they or won’t they?!”.  In fact, I’m fully on board with all the ships in this book! Nina and Matthias are pure gold and I love how oblivious he is to her constant flirting and innuendo. They’re so precious! Speaking of precious, I squeal internally every time Jesper flirts with Wylan because he gets so flustered and I love it.

I don’t think I’ll be over this book for a while because it basically had everything I needed and more. But it also hurt my soul at the same time. It was so much fun to see some faves from the Grisha trilogy as well because it was so unexpected! I’m glad I finished that series first otherwise I would have probably spoiled myself. I love that Leigh does so much crossover with her books and that she has left so much room for her world to expand.