The Age of Darkness approaches.
Five lives stand in its way.
Who will stop it… or unleash it?

For generations, the Seven Prophets guided humanity. Using their visions of the future, they ended wars and united nations―until the day, one hundred years ago, when the Prophets disappeared.

All they left behind was one final, secret prophecy, foretelling an Age of Darkness and the birth of a new Prophet who could be the world’s salvation . . . or the cause of its destruction. As chaos takes hold, five souls are set on a collision course:

A prince exiled from his kingdom.
A ruthless killer known as the Pale Hand.
A once-faithful leader torn between his duty and his heart.
A reckless gambler with the power to find anything or anyone.
And a dying girl on the verge of giving up.

One of them―or all of them―could break the world. Will they be savior or destroyer? Perfect for fans of Throne of Glass, Children of Blood and Bone, and An Ember in the Ashes.

How far would you go to save the one you love?

Okay so I kind of went into this book not totally sold by the synopsis but of course it was hyped so I needed to see what all the rage was, obviously. Let me tell you, this book is incredible! It’s got an amazing cast of characters and it’s written in a way where everything connects in very clever ways! There is no shortage of insane twists and I was pretty pleased that I guessed one big reveal pretty early on. But honestly, what a ride!

It’s told from five points of view—yes, FIVE, you read that correctly. I will admit it was a little daunting at first, but once I really got into the story there was no stopping me. My brain was fixed on trying to put the pieces of the puzzle together ands I definitely had a few “AHA!” moments. There were others where I just threw the book down in shock! This story totally DELIVERED on the twists and it was just so completely satisfying. I was thirsting for a great fantasy and I definitely got it!

Basically the core of this book has to do with some people being Graced (basically they are enhanced in magical ways) and the divide it creates in society. I won’t say too much more, but essentially the outlook is Not So Good for those who are Graced. This story has a strong religious foundation and the villain basically has a cult following, which gets pretty dark and ugly.

There Will Come a Darkness is a total force of nature in its own right and I hope it takes the world by storm. I’m definitely dying to see what happens next! 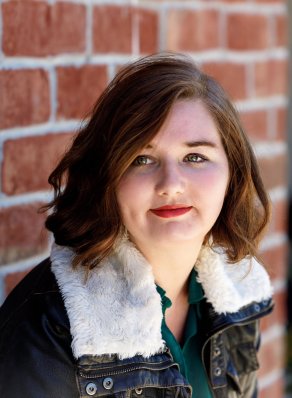 Katy Rose Pool is a writer living in Berkeley, California. She grew up in Los Angeles, where her screenwriter father taught her about three act structure, characterization, and inciting incidents all before she could tie her shoes. Katy studied history and English at UC Berkeley. She enjoys breakfast sandwiches, fancy cocktails, rooting for the Golden State Warriors, and books that set her on fire.

7 thoughts on “[Blog Tour + Review]: There Will Come a Darkness by Katy Rose Pool”