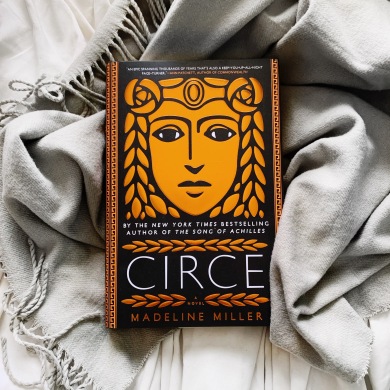 In the house of Helios, god of the sun and mightiest of the Titans, a daughter is born. But Circe is a strange child—not powerful, like her father, nor viciously alluring like her mother. Turning to the world of mortals for companionship, she discovers that she does possess power—the power of witchcraft, which can transform rivals into monsters and menace the gods themselves.

Threatened, Zeus banishes her to a deserted island, where she hones her occult craft, tames wild beasts and crosses paths with many of the most famous figures in all of mythology, including the Minotaur, Daedalus and his doomed son Icarus, the murderous Medea, and, of course, wily Odysseus.

But there is danger, too, for a woman who stands alone, and Circe unwittingly draws the wrath of both men and gods, ultimately finding herself pitted against one of the most terrifying and vengeful of the Olympians. To protect what she loves most, Circe must summon all her strength and choose, once and for all, whether she belongs with the gods she is born from, or the mortals she has come to love.

Review: Honestly, at this point, what can’t Madeline Miller do? She’s a master of storytelling and her writing just transports me. She takes my breath away with her writing because it leaps off the pages and just takes you for the ride. It’s so easy to fall into her world because everything is so vivid and detailed you can’t help it.

What she did with Circe’s character in this story is absolutely incredible. She turned the ‘wretched’ witch of The Odyssey into this formidable goddess filled with power and agency. No more is the Circe of old who would be beaten down by men and gods. Through everything I really admired Circe’s perseverance and her fearlessness. She stands up for herself knowing the consequences but although she’s continuously punished, Circe refuses to stay down.

Although the majority of the story takes place on her island prison, Madeline does so much within the confines of that space that I hardly noticed. There is also a ton of crossover with famous Greeks as well as Gods. Circe comes across a lot of interesting people throughout her immortal life, but none like Odysseus.

Now, there is a scene of sexual assault, but I loved seeing the moment Circe took power back and punished those who would dare take advantage of her. It just steeled her strength and made her realize the extent of her power. Not only physically, but mentally.

I can’t wait to read more of Madeline’s books! It’s safe to say that I’ll read anything she writes. This book is a message to all that just because the world is against you doesn’t mean you can’t stand up and fight back. It was refreshing to see more Greek myth through the female lens and I hope she continues to write her own twist on these stories!