I had a blast last weekend at another amazing Frenzy event hosted by HarperCollins Canada! I was invited by HCC Frenzy to preview all their spring 2019 titles and I’m super excited to tell you all about it.

So this time around the event started a bit earlier and I woke up super early to get ready to go. I carpooled with A Couple Reads and Flavia the Bibliophile and our drives are always the best. We drove through the pouring rain and even saw a car that managed to get stuck up on a hill behind a tree! 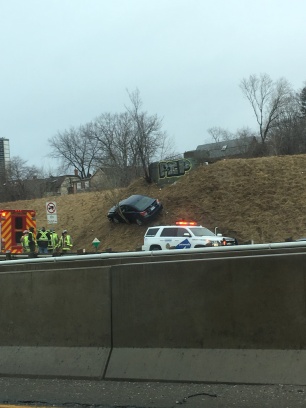 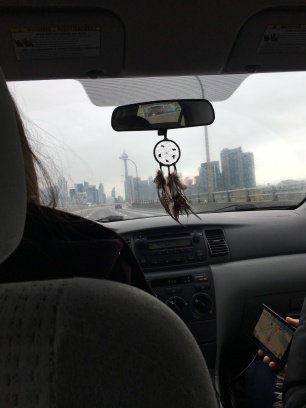 Also, shoutout to the kind security guard who ran a marathon to unlock a bathroom for us. Since we managed to get there an hour early, we met up with a few other bloggers before the event. Definitely check them out: Book Haul Holl, The Contented Reader, The Book Order, Confessions of a Book Addict, Yasmine Reads. 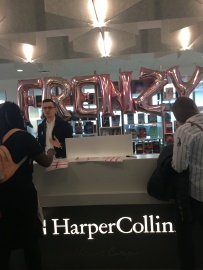 This Frenzy event was their biggest yet as there were 110 bloggers who attended! It took a while to file in where we got settled with snacks and got to chat before the event started. 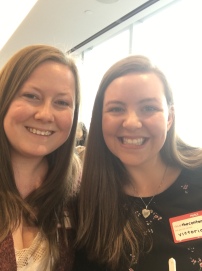 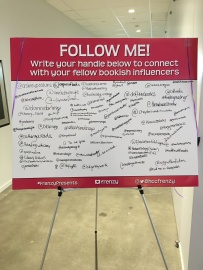 So we talked about a LOT of upcoming releases for the spring and summer! Most of what we talked about are contemporary books, but there are also quite a few amazing fantasy books that I’m looking forward to. 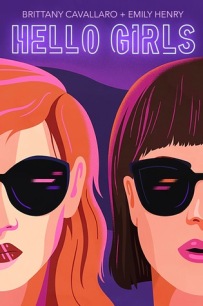 The Exact Opposite of Okay deals with slut-shaming and scandal and the pitch actually reminded me of the show Awkward. Hello Girls is basically a Thelma and Louise type story where two girls find friendship and steal a car to escape their lives. Fan the Flame deals with fandom and fighting back against sexism.

Love & Other Curses is an LGBTQ story about a family and a curse where their loved one dies if they fall in love before a certain age. Opposite of Always sounds like such a sad story because it’s about a boy going back in time to try and save the girl he loves.  The Wise and the Wicked deals with women who know exactly when they are going to die. Then we have the new Sarah Dessen book (cover to come!) about a girl reconnecting with her childhood and falling in love.

The Meaning of Birds is an LGBTQ story about art, love, loss, and friendship and I love the cover for it. Like a Love Story deals with LGBTQ and activism as well as fear of coming out in the face of discrimination. 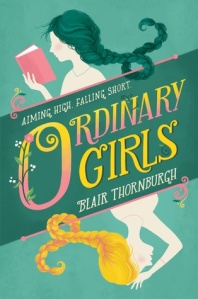 Ordinary Girls was pitched as a Sense and Sensibility retelling about two sisters. This Time Will Be Different is about family and fighting back against those who want to take away her family’s business. With the Fire on High is from the same author who wrote The Poet X and it revolves around a teen mom with a passion for cooking.

Let Me Hear A Rhyme deals with three teens who cannot overcome the death of their friend, so they make him famous by creating a rap star using his music. Sorry for your Loss is about a teen boy trying to overcome the loss of his brother.

Destroy All Monsters revolves around a girl and a boy who deal with a traumatic event when they are younger, but she has a fall and can’t recall what happened. Let’s Call it a Doomsday deals with a friendship between two girls and preparing for the end of the world. Both of these books have a mental health theme as well.

Now on to the creepy books! Last Things definitely sounds suspenseful because it’s about a musician who blames the disappearances of his cat, girlfriend, and talent on a fan. Pan’s Labyrinth is based on the movie and it has illustrations as well. The Missing Season is about kids who go missing in the month of October and a legend of a monster. 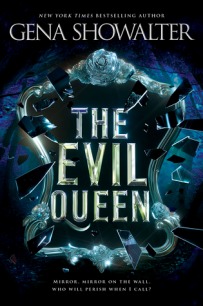 The Beckoning Shadow is pitched as The Magicians meets Fight Club and it sounds really interesting! Defy Me is the latest in the Shatter Me series and I’m obsessed with these covers. The Evil Queen is a Snow White retelling about the evil queen and her affinity for mirrors.

Finally, here are the upcoming releases I was most excited for going into the event: 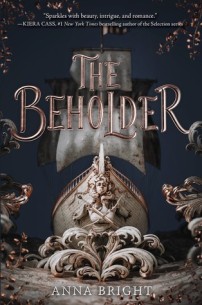 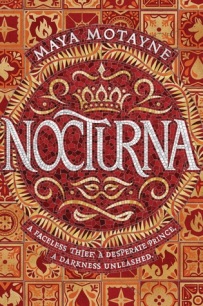 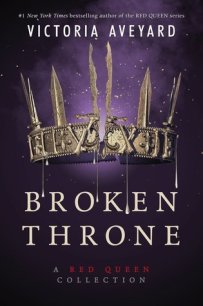 After the event, while everyone else headed to the Angie Thomas event, we headed to have some lunch and spent hours chatting about books. It’s always such a good time hanging out with these ladies and I wish we could do it more often. 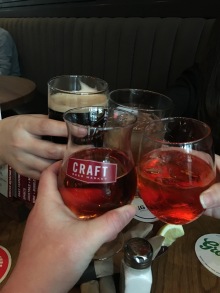 As always, we each got swag bags at the end of the event. In each of our bags we received a sampler of The Evil Queen by Gena Showalter, a bath bomb, candy, bookmarks, a popsocket, a button, detox tea, a Six of Crows pillowcase, and the new Frenzy mug, which I’m obsessed with. 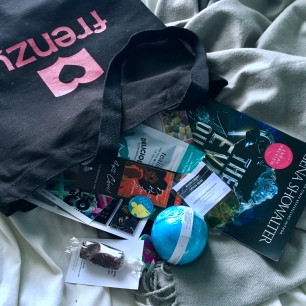 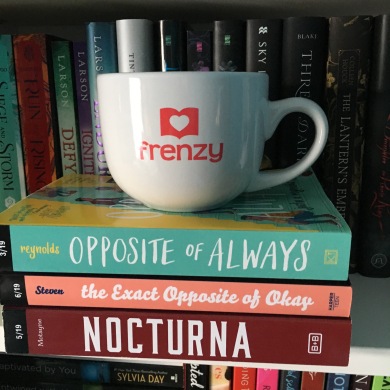 There were also three ARCs included in each swag bag! I managed to get one of my most anticipated as well, which is fantastic! It’s always so exciting to try out new books and I’ve been trying to get into more contemporary lately.

To Finn Voy, magic is two things: a knife to hold under the chin of anyone who crosses her…and a disguise she shrugs on as easily as others pull on cloaks.

As a talented faceshifter, it’s been years since Finn has seen her own face, and that’s exactly how she likes it. But when Finn gets caught by a powerful mobster, she’s forced into an impossible mission: steal a legendary treasure from Castallan’s royal palace or be stripped of her magic forever.

After the murder of his older brother, Prince Alfehr is first in line for the Castallan throne. But Alfie can’t help but feel that he will never live up to his brother’s legacy. Riddled with grief, Alfie is obsessed with finding a way to bring his brother back, even if it means dabbling in forbidden magic.

But when Finn and Alfie’s fates collide, they accidentally unlock a terrible, ancient power—which, if not contained, will devour the world. And with Castallan’s fate in their hands, Alfie and Finn must race to vanquish what they have unleashed, even if it means facing the deepest darkness in their pasts.

The Exact Opposite of Okay by Laura Steven

Eighteen-year-old Izzy O’Neill knows exactly who she is—a loyal friend, an aspiring comedian, and a person who believes that milk shakes and Reese’s peanut butter cups are major food groups. But after she’s caught in a compromising position with the son of a politician, it seems like everyone around her is eager to give her a new label: slut.

Izzy is certain that the whole thing will blow over and she can get back to worrying about how she doesn’t reciprocate her best friend Danny’s feelings for her and wondering how she is ever going to find a way out of their small town. Only it doesn’t.

And while she’s used to laughing her way out of any situation, as she finds herself first the center of high school gossip and then in the middle of a national scandal, it’s hard even for her to find humor in the situation.

Izzy may be determined not to let anyone else define who she is, but that proves easier said than done when it seems like everyone has something to say about her.

Opposite of Always by Justin A. Reynolds

He almost made valedictorian.

He almost made varsity.

When Jack and Kate meet at a party, bonding until sunrise over their mutual love of Froot Loops and their favorite flicks, Jack knows he’s falling—hard. Soon she’s meeting his best friends, Jillian and Franny, and Kate wins them over as easily as she did Jack. Jack’s curse of almost is finally over.

But this love story is . . . complicated. It is an almost happily ever after. Because Kate dies. And their story should end there. Yet Kate’s death sends Jack back to the beginning, the moment they first meet, and Kate’s there again. Beautiful, radiant Kate. Healthy, happy, and charming as ever. Jack isn’t sure if he’s losing his mind. Still, if he has a chance to prevent Kate’s death, he’ll take it. Even if that means believing in time travel. However, Jack will learn that his actions are not without consequences. And when one choice turns deadly for someone else close to him, he has to figure out what he’s willing to do—and let go—to save the people he loves.

Thank you so much to the HCC Frenzy team at HarperCollins Canada for hosting such an amazing event! I got to meet so many awesome people and the whole experience was incredible. I’m still totally on a book high from it and I’m never coming down!

Did you see any amazing new books to add to your TBR? Any you’re super excited for? Let me know in the comments!