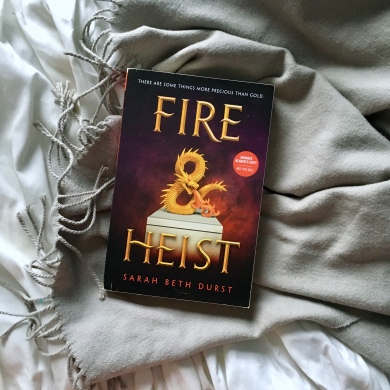 In Sky Hawkins’s family, leading your first heist is a major milestone–even more so than learning to talk, walk, or do long division. It’s a chance to gain power and acceptance within your family, and within society. But stealing your first treasure can be complicated, especially when you’re a wyvern–a human capable of turning into a dragon.

Embarking on a life of crime is never easy, and Sky discovers secrets about her mother, who recently went missing, the real reason her boyfriend broke up with her, and a valuable jewel that could restore her family’s wealth and rank in their community.

With a handpicked crew by her side, Sky knows she has everything she needs to complete her first heist, and get her boyfriend and mother back in the process. But then she uncovers a dark truth about were-dragon society–a truth more valuable and dangerous than gold or jewels could ever be.

Review: The first thing I have to say about Fire and Heist is that it was definitely a bit different than I expected. I guess I was picturing more dragons and more heisty stuff. This book had stronger romance and family themes overall. Everything that Sky does is basically to find out what happened to her mother, but she’s also dealing with her first heartbreak. If you’re looking for a solid teen were-dragon fluff book, then you need to pick this book up.

Every wyvern has to prove themselves to society by successfully completing a heist. The rules? Don’t get caught, don’t steal from humans, and definitely don’t fail. Failure can mean becoming an outcast, and for a wyvern reputation (and gold) is everything. After Sky’s mother goes missing, her family falls from grace and they are barely staying afloat. So in order to save her family, she decides to run her first heist and finish what her mother started. What she doesn’t know is that she is putting herself in more danger than she can imagine.

Some drawbacks (for me, at least) were the romance and the pacing. Sky and Ryan’s relationship was a major focal point and I found it was often more of a distraction than anything else. I didn’t feel invested in their relationship at all. In all honesty, the focus should have been on the female friendship in this story because I loved it! This story also moved very quickly, and it was hard to get a sense of the world. I just wish that there was more time taken with details and descriptions so I could fully immerse myself in the book.

I really enjoyed that this book deals with magic and that gold is currency! There is a certain wizard who reminded me a lot of Magnus Bane and he was my favourite character hands down. The story also had an urban feel to it as well because humans are aware of wyverns and have (mostly) accepted them into society.

I’d say if you enjoyed the Talon series by Julie Kagawa, then you’ll definitely enjoy this story. It has an otherworldly feel to it, and the whole dragon society/right of passage thing is there too. Overall, it was a quick, fun read and while I expected more, you should check it out!