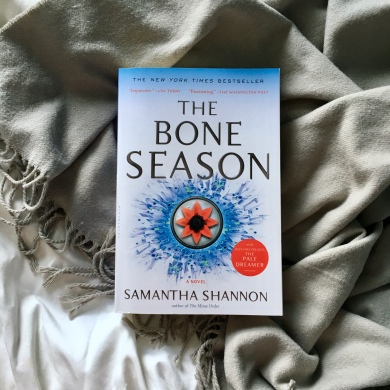 The year is 2059. Nineteen-year-old Paige Mahoney is working in the criminal underworld of Scion London, based at Seven Dials, employed by a man named Jaxon Hall. Her job: to scout for information by breaking into people’s minds. For Paige is a dreamwalker, a clairvoyant and, in the world of Scion, she commits treason simply by breathing.

It is raining the day her life changes for ever. Attacked, drugged and kidnapped, Paige is transported to Oxford – a city kept secret for two hundred years, controlled by a powerful, otherworldly race. Paige is assigned to Warden, a Rephaite with mysterious motives. He is her master. Her trainer. Her natural enemy. But if Paige wants to regain her freedom she must allow herself to be nurtured in this prison where she is meant to die.

The Bone Season introduces a compelling heroine and also introduces an extraordinary young writer, with huge ambition and a teeming imagination. Samantha Shannon has created a bold new reality in this riveting debut.

Review: After hearing about how great this series is, I had to give it a shot. It’s not the genre I would normally go for seeing as it’s more dystopian/sci-fi, but I ended up really loving it. While I did initially struggle to get into the book, I ended up falling for the world, the characters, and the romance. It does take time to orient yourself in the world and jargon, but it’s definitely worth it.

The Bone Season is set in an alternate London run by Scion where clairvoyants hide in fear of persecution and execution. They hide in an underground network of gangs under the employment and protection of mime-lords and mime-queens.

Paige Mahoney is a dreamwalker who works for the Seven Seals. She always knew she was different and she is brought to Jaxon Hall, he gives her a job and helps her harness her abilities to use the spiritual realm. Her life is going pretty good until she’s caught. She wakes up in a place called Sheol I, which is essentially a prison camp. It’s run by otherworldly beings called Rephaim. Paige is chosen by Warden to train with, a Rephaim who has never taken on a human. She quickly learns the price for defiance and that her fate is certain death, unless she can find a way out.

I really fell for the characters in this book. Paige is strong-minded and stubborn even in the face of death. She definitely has a defiant spark and doesn’t take too well to authority figures telling her what to do. Warden is about as mysterious as they come. At first he’s made out to be cold and distant, but as he gets to know Paige he definitely opens up. The main villain Nashira is just pretty much pure evil and I loved it. She’s so brutal and basically dangles Paige’s death in front of her every chance she gets. It’s a total cat-and-mouse game.

This book definitely has a slow burn romance, but it’s worth the wait. I’m basically now addicted to Paige and Warden and I need to read the sequels because I need to know what happens! All of the danger and suspense definitely kept me thirsting for more as well. It was hard to know who to trust and I still honestly don’t know who isn’t capable of a good backstabbing. I have so many theories about what is going to happen after this book and I want to see some of them come true.

3 thoughts on “[Review] The Bone Season by Samantha Shannon”