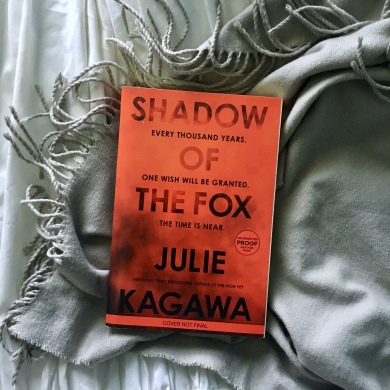 One thousand years ago, the great Kami Dragon was summoned to grant a single terrible wish—and the land of Iwagoto was plunged into an age of darkness and chaos.

Now, for whoever holds the Scroll of a Thousand Prayers, a new wish will be granted. A new age is about to dawn.

Raised by monks in the isolated Silent Winds temple, Yumeko has trained all her life to hide her yokai nature. Half kitsune, half human, her skill with illusion is matched only by her penchant for mischief. Until the day her home is burned to the ground, her adoptive family is brutally slain and she is forced to flee for her life with the temple’s greatest treasure—one part of the ancient scroll.

There are many who would claim the dragon’s wish for their own. Kage Tatsumi, a mysterious samurai of the Shadow Clan, is one such hunter, under orders to retrieve the scroll…at any cost. Fate brings Kage and Yumeko together. With a promise to lead him to the scroll, an uneasy alliance is formed, offering Yumeko her best hope for survival. But he seeks what she has hidden away, and her deception could ultimately tear them both apart.

With an army of demons at her heels and the unlikeliest of allies at her side, Yumeko’s secrets are more than a matter of life or death. They are the key to the fate of the world itself.

Review: This book totally blew me away! Shadow of the Fox is a Japanese-inspired fantasy about a kitsune on a quest to keep an ancient scroll safe from those who would abuse the dragon’s wish granted every thousand years. It has such a colourful cast of characters and such a rich plot filled with endless action and epic worldbuilding.

Yumeko is such a great character and I love how mischievous she can be. She loves to have fun and play pranks on the monks, never fearing their punishments. Everything changes for her when a story she was told about a wish and a scroll suddenly becomes true. She’s on the run from demons when she runs into Kage Tatsumi and drags him on her quest with the promise of the location of the scroll. Tatsumi is part of the Shadow Clan and is more commonly known as the Demonslayer. He’s sent on a mission to find a piece of the scroll, not knowing its importance.

She doesn’t tell him that she’s a kitsune or that she has the scroll, and I was very impressed by her. Their chemistry was amazing and I loved his brooding in comparison to her joyful innocence. Tatsumi battles with himself throughout the story because he is not supposed to show emotion, but Yumeko makes him feel. I really enjoyed the growth that Yumeko went on because she goes from this shy little fox-girl to a fierce demon butt-kicking heroine.

I really loved that this was non-stop action. This was one book I didn’t want to put down because I felt so invested in the characters and the constant danger that followed them. They are being hunted by everyone and everything from demons to blood magic. It was just all so incredible!

Shadow of the Fox is nothing short of an epic quest filled with rich Japanese mythology. It’s a fantasy filled with deception, betrayal, magic, demons, and adventure. It was impossible to put down and I still can’t believe that ending! I also might be obsessed with a certain ronin who shall not be named.

4 thoughts on “[Review] Shadow of the Fox by Julie Kagawa”