This weekly meme was created by Milana @A Couple Reads and Flavia @Flavia the Bibliphile to feature and discuss backlist books (books that were published six months ago or earlier) that are on your TBR and you have yet to read. Another purpose is for readers to find out about awesome backlist books that they might have never heard of before! For more information on the meme, and for optional themes, please see the info page here.

Note: They have created banners which you can find on their blogs to use for this meme, but I have created my own. Feel free to use the ones they created, mine, or create your own!

Make sure to tag the original creators (see above) and comment on their Backlist Blast posts to let them know you’re participating! 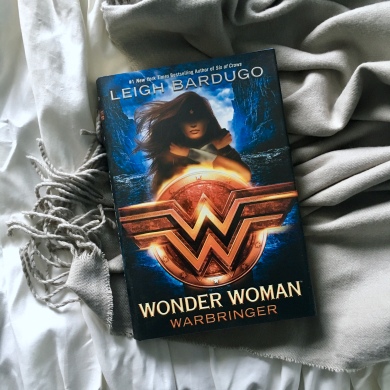 Princess Diana longs to prove herself to her legendary warrior sisters. But when the opportunity finally comes, she throws away her chance at glory and breaks Amazon law—risking exile—to save a mortal. Diana will soon learn that she has rescued no ordinary girl, and that with this single brave act, she may have doomed the world.

Alia Keralis just wanted to escape her overprotective brother with a semester at sea. She doesn’t know she is being hunted by people who think her very existence could spark a world war. When a bomb detonates aboard her ship, Alia is rescued by a mysterious girl of extraordinary strength and forced to confront a horrible truth: Alia is a Warbringer—a direct descendant of the infamous Helen of Troy, fated to bring about an age of bloodshed and misery.

Two girls will face an army of enemies—mortal and divine—determined to either destroy or possess the Warbringer. Tested beyond the bounds of their abilities, Diana and Alia must find a way to unleash hidden strengths and forge an unlikely alliance. Because if they have any hope of saving both their worlds, they will have to stand side by side against the tide of war.

I honestly don’t know how I haven’t read this book yet. Yes, I did read the second in the series, Batman: Nightwalker by Marie Lu, but not this one. I don’t know how I did that? Especially considering my newfound undying love for Leigh Bardugo! Well, that will have to be remedied somehow because I’ve heard great things about this book and it’s Wonder Woman, duh.

Do you have any books by one of your fave authors that you haven’t read yet? Have you read this book? Let me know in the comments!