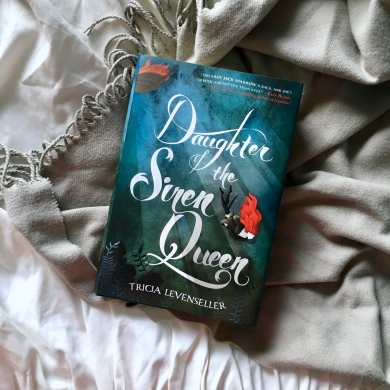 Alosa’s mission is finally complete. Not only has she recovered all three pieces of the map to a legendary hidden treasure, but the pirates who originally took her captive are now prisoners on her ship. Still unfairly attractive and unexpectedly loyal, first mate Riden is a constant distraction, but now he’s under her orders. And she takes great comfort in knowing that the villainous Vordan will soon be facing her father’s justice.

When Vordan exposes a secret her father has kept for years, Alosa and her crew find themselves in a deadly race with the feared Pirate King. Despite the danger, Alosa knows they will recover the treasure first . . . after all, she is the daughter of the Siren Queen.

Review: Oh boy, do I love pirate books! I’m not going to lie, but I think I liked the sequel better than the first book! Alosa’s character was as fierce as ever and I love the journey that she goes on in this book, both physically and mentally. There were definitely higher stakes in this book because Alosa and her crew were racing against time and the Pirate King to get to the sirens’ treasure first. Alosa is not only fighting to keep herself alive in this one, but also her entire crew as well as Riden.

I really enjoyed getting to know the crew more because the first book only showed glimpses of them. Each one of them has so much personality and I’m impressed at the depth of all the secondary characters. Roslyn is definitely my fave because she’s constantly bossing people around trying to be a pirate, but she’s a little girl! Alosa’s crew just has so much respect for her and I love it. There were a lot of crazy obstacles that the crew had to overcome (there was totally a scene with eels that gave me The Princess Bride vibes) to get to the sirens as well and the pace never slowed down for a second. It’s surprising how well a book about pirates at sea can be written when it’s well thought out.

I love how Alosa and Riden’s relationship progresses in this story, even if it’s not an “in your face” romance, it’s still there. It’s funny because Alosa pretends to be this tough female pirate captain with no emotion, but Riden is able to make her feel. Their relationship is a super slow burn romance, and the chemistry is swoon worthy. What I love about their relationship the most is that it doesn’t take away from the theme of fierce femininity within the story. Alosa doesn’t need a man to save her and I love how strong and independent she is as a character.

We also get to learn more about the sirens (turns out they don’t have tails?) and a certain Siren Queen also makes her appearance as well. Alosa decides that she needs to learn to tame the monster within her and the only way she can seem to do that is when Riden is around. She learns the limits of her abilities and how to control them without killing everyone in her sight.

This conclusion is full of action, pirate fights, fierce female pirates, sirens, and we can’t forget the romance. So much piratey goodness packed into a satisfying end to a duology and the end of a quest! I can definitely see the comparison to Pirates of the Caribbean (particularly the second and third movies) more in this book than the first in terms of general plot elements. Highly recommend this series because it’s honestly such a fun read!