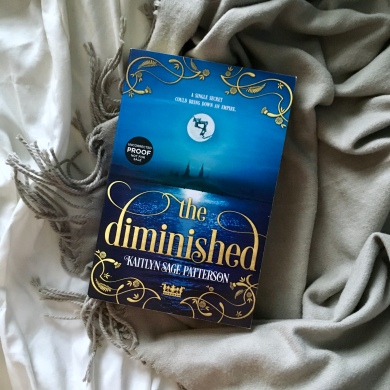 Review: This book was such a rich fantasy filled with betrayal, murder, and secrets that could cause the Empire to crumble. The mythology was so intriguing and I love the history behind how the world was created. To say the least, this book had me hooked. There were so many moments that had me shaking the book with my jaw hanging open, and then there were the few spare moments that just made me smile. The Diminished was a total emotional jolt to the system through and through. If I had to sum it up, I would say this book is a serious clash between religion and royalty right down to it’s spine.

In the Alskad Empire, there are the singleborn, the twins, and the diminished. The singleborn rule and the diminished are contained by the Shriven, a group of religious radicals trained to protect the Empire. Bo is one of the few singleborn, and the crown prince of the Empire. The only problem is that he’s not sure he’s the right fit for the job and is plagued with self-doubt. Vi lost her twin when she was a baby and was left at the temple to await the day she succumbs to the violence that comes with being diminished.

Vi is presented with an impossible choice as punishment for breaking the law and she chooses the option that will reunite her with her friends on a distant island. The only problem is, she unknowingly signs a contract with a monster. When Bo suffers a great loss, he begins to question everything and everyone around him. In a twist of fate, Vi and Bo are brought together and discover a plot to overthrow the Empire and make them question everything they’ve been taught to fear. With time running out and the Shriven hunting them, they must figure out a way to save the Empire before it’s too late.

There was such a great cast of characters in this book. I really enjoyed that Bo had a male love interest! It was interesting to see a male protagonist in a position of power so in tune with his emotions. This book definitely played against stereotypes with it’s male protagonist. I loved that it was a dual POV as well, because his character really complimented the stubborn and overly opinionated Vi.

This is a book that will make you really think about what’s going to happen next. I held my breath waiting for my theory to come true and when it did I had to sit there and let it sink in. While I was able to connect hints dropped throughout the book, it was still a shock to see my prediction come true.

Now, the only thing about this book I didn’t enjoy was that it took a while to get into. The plot in the beginning was kind of dry and definitely needed some more action to set the pace. Once things got rolling though, this book stopped for nothing.

By the end of this book, I was holding my breath to see how it would end. It definitely did not take mercy on my poor soul. This book left me reeling and wondering who to trust and how deep the secrets lie within the Alskad Empire. There is rebellion brewing and I can’t wait to see how everything plays out. I’m definitely looking forward to where the next book will go!

2 thoughts on “[Review] The Diminished by Kaitlyn Sage Patterson”