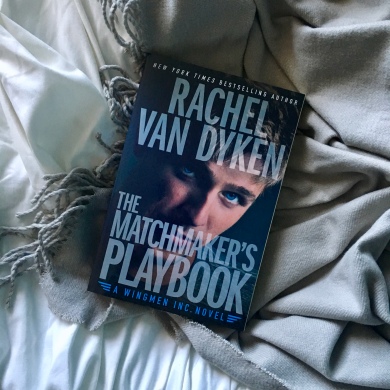 Wingman rule number one: don’t fall for a client.

After a career-ending accident, former NFL recruit Ian Hunter is back on campus—and he’s ready to get his new game on. As one of the masterminds behind Wingmen, Inc., a successful and secretive word-of-mouth dating service, he’s putting his extensive skills with women to work for the lovelorn. But when Blake Olson requests the services of Wingmen, Inc., Ian may have landed his most hopeless client yet.
From her frumpy athletic gear to her unfortunate choice of footwear, Blake is going to need a miracle if she wants to land her crush. At least with a professional matchmaker by her side she has a fighting chance. Ian knows that his advice and a makeover can turn Blake into another successful match. But as Blake begins the transformation from hot mess to smokin’ hot, Ian realizes he’s in danger of breaking his cardinal rule.…

Review: I loved this so much! It was such funny, charming, and sexy romance to read. Rachel Van Dyken has honestly become an auto-read author for me so I don’t even question that her books will be great every time. Ian and Blake’s story is no exception!

Ian and his best friend Lex run Wingmen Inc. which is basically a dating service where they help girls get the guy they want. The one rule of Wingmen Inc.? No falling for the clients, which is no problem because both guys are afraid to commit and love to play the field.

Enter Blake. When Ian first meets his best friend’s new roommate, she is not what he expected at all. She’s wearing basketball shorts, a baggy sweatshirt, and nike flip flops that make him cringe. Totally not his type. Then, when Ian is waiting for his next client to show up, Blake is the last person he expects to see. She’s never even been kissed, let alone been on a date or lost her virginity. As he helps her get the guy she wants, Ian realizes he wants the one girl he can’t have.

This was such a slow-burn romance because there was so much innuendo and the off-limits factor was insane! Ian and Blake had so much chemistry going for them with their constant banter and insults. I have to give it him, Ian had some pretty amazing self-control when it came to Blake being his client.

One of my favourite parts of the book was definitely the subplot with frenemies Gabi and Lex! They were constantly at each other’s throats and I need more of them. Now their chemistry is off the charts and I can’t wait for more of them in the sequel.