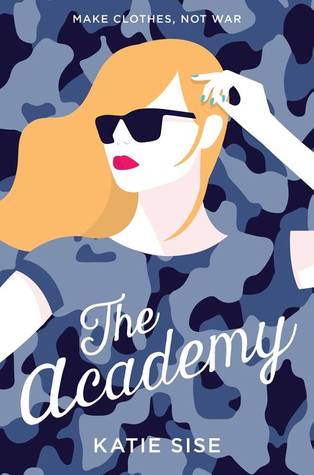 Frankie Brooks knows what she wants in life: to become the world’s next great fashion editor. All she needs to do is get into the elite American Fashion Academy in New York City. If she gets in, her life plans will be going right on schedule. Anna Wintour, watch out.

But after Frankie messes up one too many times—hey, it’s hard not to prioritize her acclaimed fashion blog above all else—her parents come up with entirely different plans for her future: military school. How is Frankie, the least athletic person in the world, who knows absolutely nothing about the military, going to survive a whole semester at the famed—and feared—Academy?

With classmates who seem to be totally uninterested in her, a course load that’s even more difficult than her old school’s, and the weird War Games competition she has to join, Frankie finds that her life is way tougher than it used to be. And no one, including her roommate Joni, seems to understand Frankie at all.

As she learns how to cope with impossible military drills and intimidating specialized classes and is maybe even falling for super-hot and super-smart cadet Jack Wattson, can Frankie prove to everyone that being a fashionista doesn’t mean she can’t succeed?

Does this not remind everyone of a certain Disney Channel movie that happened years ago starring Hilary Duff called Cadet Kelly?! This honestly makes me so happy because it sounds almost identical and I can’t wait to relive this experience in book form. It sounds like a super cute romance is going to happen and I do love the fluff! Plus it’s been compared to Kasie West and I became an auto-fan after reading On the Fence. And the cover! That camo design is completely on point. I’m so happy this book came on my radar!