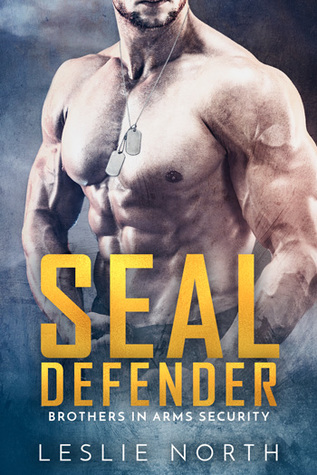 Mark Aleki Rogers left the Navy SEALs behind, but he found another use for his special skills. He and his fellow “Brothers-in-Arms” now run an intense boot camp that trains civilians to survive extreme situations. Mark’s size is intimidating, but the half-Samoan surfer is an eternal optimist. A suspicious string of suicides among SEALs, however, has Mark convinced it’s murder. He’s determined to get to the bottom of it…quietly. If he doesn’t, a murderer may go free.

Reporter Geneva Rios has come to the California coast looking for a story. The recent SEAL suicides are connected to the Brothers-in-Arms, and Geneva wants to know more. The interview she’s hoping for, though, comes at a price. The smoking-hot SEAL won’t talk unless she completes his training course. If she can survive Mark’s audition, she’ll have the angle she needs. Spending more time with Mark has its own perks, but for the exotic brunette, exposing the Navy SEALs is more than just a story…it’s personal.

As the heat between them reaches its boiling point, the pair puts more than their heads together. But with their own lives in danger, can they catch a killer before it’s too late?

Review: I can honestly say this book was a page turner. It had everything from romance, mystery, political intrigue, racial awareness and action to a hot male protagonist which had me picturing Dwayne Johnson the entire time. I really enjoyed the sexual tension between Mark and Geneva, because most romance books would have had the two between the sheets right away, but there was a foundation built first. Geneva is a fiery woman who seems to always get what she wants, and I like that she isn’t afraid to speak her mind. This is more of a slow-burning romance that kept me on my toes the entire time. The sex could have used more sizzle and needed to be drawn out longer, because it ended so quickly.

There was a lot of focus placed on the mysterious deaths of ex-SEALs, which gave the story a lot of depth and I had to keep reading to know what was happening. One aspect that was interesting was the political atmosphere because it echoes exactly what the states is dealing with right now with Trump in charge. There is also a lot of racial awareness happening in this book, with Mark being half-Samoan and Geneva being half-Mexican, which I find to be refreshing. It really highlights the ignorance that still goes on in today’s society. One thing I wish this book had more of overall though is more of a sense of real danger. Sure, it had plenty of action and murder, but I wish the scenes were fleshed out more for it to be effective.